Breastfeeding
Breastfeeding is very common in Iceland and the health care system goes to lengths to assist women in breastfeeding. Some mothers are successful but others are not and it’s important to accept that as well. According to the Directorate of Health (data for 2004-2008) , 97-98% of infants are exclusively and partially breastfed in the first week after being born, 92% of 6 week olds, 82-86% of 3 month olds, 71-76% of 6 month olds and 24-30% of one year olds still get breastfed by their mothers occasionally, along with nourishment from other sources.

The benefits of breastfeeding are unambiguous; it has the perfect nutritional combination, contains hormones and antibodies that protect the newborn against diseases, has the correct temperature and sanitation is less of a problem. It also provides the essential skin-to-skin contact and ensures the bonding between a parent and the newborn that often is missed when babies are bottle fed. Finally, the breastfed baby is somewhat in charge of the amount it consumes and the speed of their drinking (very often they drink the most while half asleep and pause occasionally) whereas bottle fed children are often encouraged to finish their bottle and drink up.

Finally it is considered beneficial for the mother as it helps with the uterus reduction after birth and those pregnancy weights off.

Women are very often seen breastfeeding in public and generally it is considered an admirable and peaceful act, the culture embraces it. Equally it is important to support mothers who, for one reason or another, don’t breastfeed. Those women often complain that the emphasis on breastfeeding is so rich that they feel they’re lacking standard as mothers. Nobody should feel that way. 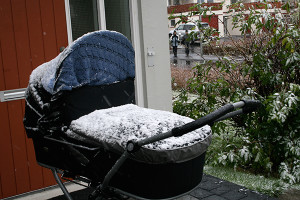 Morning and afternoon napping in a pram outside is very common in Iceland and Scandinavia. Our outdoor temperature is actually very mild both winter and summer, spans from -10°c during coldest winters to +25°c on the hottest summer days. The air is quite clean because both carbon energy sources are uncommon (houses are heated via hot geothermal water) and the winds make sure that the air is ventilated quite well. Because of this, people believe wholeheartedly that napping outdoor in a pram, in any kind of weather (dressed to the occasion) is very beneficial for the health of a child. My boys always slept outside during daytime and often slept for 3-4 hours in each session and I felt that they were much more alert and had a better appetite after being exposed to the cold air. Their cheeks and nose were cold and red when they came in from the pram but the neck and the rest of their bodies were warm and cozy.

Being in a safe environment of course comes number one. If I didn’t trust that my child would be safe I would never think of letting him sleep outdoors. Also they are never unattended, monitoring the pram is essential and most of the time we use a monitoring device that picks up sound from the pram so we know when he’s waking up.

Fish liver oil
I don’t know how common it is elsewhere to give children 6mths+ fish oil as a supplement, but in Iceland it is advised both because of the lack of sunlight during winter months (october-march) and therefore lack of vitamin-D but also for the Omega-3 fatty acids. There’s no need to worry about fish allergies since the fatty acids from the fish liver don’t contain protein/amino acids, which is the allergy trigger.

Free healthcare for both baby and mother
As in the other nordic countries all health care for pregnant women and children in Iceland is free, that includes all necessary screenings during pregnancy and infant vaccinations. Financial status should not have any effect on the service that the health care system provides.

Maternity leave
In Iceland the rules for maternity/paternity leave is that the mother gets 3 months, fathers 3 months and they get in addition 3 months which they can arrange as they wish, most of the time it’s the mothers who get the 6 month leave – which can be taken during the first 18 months after the child is born. For example I’ll be on a 50% leave for 12 months because I want to stay at home with the kids and not put her to daycare too early.

Being at home during the first year is essential for the baby’s health and for psychological bonding. I know not everybody can do that but it is common in Iceland to extend the maternity leave. I’m also fortunate to be able to work at home to some extent, although I know time will be scarce.

These are a few notes that I think are important in our culture in taking care of our children, whether they are the reason that the rates are lower here than elsewhere. Worthy of a thought.